There is so much entertainment on offer everywhere these days; it is a pleasure to go to real theater. Nothing beats its authenticity. Last week I saw “Sweeney Todd” at the Barrow Theater. I did find the violence of the story a tad bit unsettling, as it was more in your face with this intimate production.  It was still–pure entertainment. Not only were the voices and the performances powerful and intense, particularly that of Norm Lewis who has just taken over the lead role, but the pies were tasty! Obama himself said it will be “the best pie you have ever eaten.” Having enjoyed the vegetable pie immensely, I concur.

On a more serious note, I also saw Eugene O’Neil’s “The Hairy Ape.” 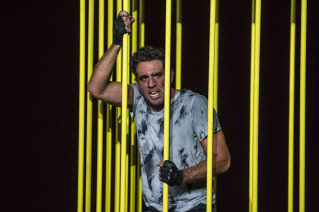 This play was also intense; with a human – animal comparison throughout the piece. I admired it, as “enjoyment” is not the right word to apply. Set in 1922, pre-Depression era New York, the main character Yank finds himself “at sea” in a life dominated by wealth and greed. He longs to be valued as an honest hard worker, skilled in the ways of sailing and coal slinging, yet his values are not prized in the world that employs him. When he sets his eyes on the President of the company’s daughter, his life is altered forever. I left the theater feeling a little bewildered, curious yet inspired. I can’t imagine anyone else other than Bobby Cannavale playing the lead role. The venue and the production were incredible; I thought holding it at the Park Avenue Armory really fit the material.

One of the sweet things to come out of my theater-going experience was meeting Elaina, (Sweeney) who runs Big Smile Entertainment out of Boston. Looks to me like she runs an outstanding organization!