OK so I did it. At yesterday’s concert on 10.16.16, I read a few vignette’s from my show THE PASS interspersed with songs at yesterday’s concert. I really did it and I am excited and also feeling such a sense of euphoria. Here is a photo of me, Brendan Litttlefield and my new Behringer Europort PPA 200 with  Klark Teknik Effects built in, after the concert. Having my own PA is amazing, it is a much needed tool, compact, powerful with great effects. 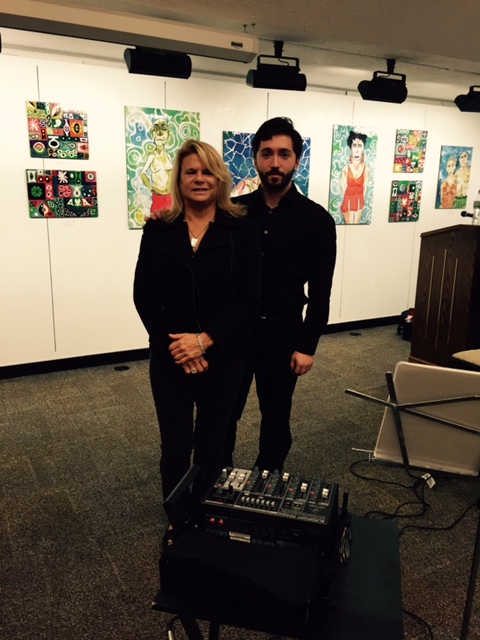 Brendan and I rehearsed quite a bit and we had two rehearsals back to back on the 2 days before the show. We put together a strong set and worked on new arrangements and played my songs from the past 4 decades – from the 80’s thru 2016! and it was a blast and the audience really enjoyed and told us so! I am really fueled up now to work more and harder on THE PASS.

Library gigs are cool. The good news is they pay for the programs they bring in. Some of the libraries have bigger budgets depending on the size of the town and population. Libraries offer programs to their communities for free.

We performed in the Palmer Museum in the Springfield Library where they have a very old piano – one that Brendan truly enjoyed playing. There’s an exhibit as well and the current exhibit is from Sam Caponegro. Here’s one of Sam’s paintings:

This was my second concert at Springfield Library in Springfield, New Jersey and I loved it. I had the chance to test the waters for THE PASS and the audience was entertained.

And I am still basking in the delight of the euphoria…

Denise Marsa, originally born in Trenton, New Jersey, has been writing and producing music for decades. She is an award winning singer/singer and producer. View all posts by denise marsa