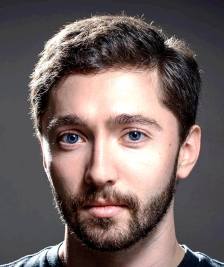 Started working with the very talented Brendan Littlefield preparing for the Sunday, October 16 2PM show at Springfield Library Museum. We are also working on THE PASS!

Here’s a bit about Brendan:

Brendan Littlefield (b.1989) is a Brooklyn-based composer, arranger, pianist, and baritone. He completed his master’s degree in theory and composition at New York University Steinhardt in May of 2016.

Through the years he has been fortunate to study piano with Jung and Steven Spooner, voice with David Meyer, Jay Rozendaal, and Paul Speiser, and composition with Roger Briggs, Julia Wolfe, and Michael Gordon.

Born in New York, raised in Idaho, and schooled in the Northwest, Brendan has deep roots in a variety of musical styles and disciplines, from free improvisation, to blues, to folk music, to opera.  The son of two accomplished, classically-trained singers, his musical training at the piano began at the early age of 3, and continues today.  Brendan found himself gravitating towards composition very early on, through the lenses of piano improvisations and, now, songwriting and working with a variety of solo artists and bands.

College provided him with the opportunity to polish his understanding of composition and musical theory, as well as continuing his study of a variety of different aspects of musical performance, from voice to conducting.

Brendan’s music is rooted in the marriage of the old and familiar with the new and exciting.  Innovative use of everything from instrumental techniques to rhythm and tonality drive his work, and he draws on both his extensive performance experience and his jack-of-all-trades approach to life in general to create a wide variety of lyrical, harmonically-intriguing, and rhythmically-complex pieces.

The Pass will launch in the Spring of 2017 with initial readings being held in NYC.

Denise Marsa, originally born in Trenton, New Jersey, has been writing and producing music for decades. She is an award winning singer/singer and producer. View all posts by denise marsa